Treason Is the Reason: Advent in the Shadow of Dread 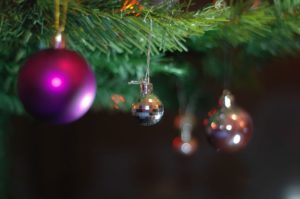 Silver bells, angels, white snowflakes drifting down, chestnuts roasting on an open fire—for many in the United States, Christmas season evokes deep nostalgia, cozy family traditions, a pause to reconnect with our faith and our deepest values. Christmas brings people together for a little while, even as traditional religion declines and chronic, vicious culture wars make us wonder whether Americans can still agree on anything at all. Celebrating this temporary but sweet unity, let me raise a glass of eggnog to the health of us all and wish you Happy Holidays (translated, of course, into whatever phrase best connects to your faith or lack of such).

Ah, but you knew better. Of course that isn’t what I came here to say.

I came to warn you to be vigilant, lest all this slip away from us. Unless we remain faithfully focused on the ritual trappings of the advent festivities—the old songs and traditions, the delicate ecumenism, the seasonal burst of charity and kindness, the flurry of shopping and new toys, the candlelit church services, the laughter and banquets that mark this last great common rite of the Western world—unless we cling to these things with our very lives, we could lose it all.

Yes, I said all—not merely Christmas as we know it, but the entire structure of Western Christendom, pulverized like a clay god beneath a rockslide. Because what lurks beneath the veneer of our cozy Christmas traditions is so dangerous, so absolutely Other, that if we ever let it emerge fully into this world, it will topple civilization itself, replacing it with something alien and horrifying. From that unthinkable disaster there will be no recovery and no return.

We collectively dodged this bullet once, long ago, in the Middle East. A caravan of pagan mystics wandered into Jerusalem, which was enjoying a fragile stretch of religious freedom under Imperial Rome. The mystics said a new Jewish king had been born and asked for directions.

The local Jewish religious leaders cooly expounded the prophecies that would help the mystics locate the new “king,” then wisely stayed quiet, out of the fray, while the pagans sought out the young imposter, while the weird and sinister star fizzled overhead, while Herod—no angel but a decent ruler, all in all—deployed a homeland security strike force to execute every baby in Bethlehem in a preemptive strike at this threat to the hard-won tranquility of the region and the sacred city.

Herod knew, and the religious leaders knew, that the announcement of this baby in Bethlehem could lead to nothing short of naked treason—treason of the most disastrous kind. In hindsight, we know their concern was warranted. That’s because the child, Jesus, escaped the purge. His parents smuggled him into Egypt until the authorities forgot about him, and a few years later they returned to Galilee, where his royal ambitions blossomed.

In his early thirties Jesus began preaching and gathering followers, taking his place in the long, pathetic line of doomed Jewish messiahs. But unlike previous messiahs, Jesus promised to free his followers both from bondage to their enemies and from the deeper bondage to sin itself. His claim of divinity and demand for total allegiance threatened the Jews’ fragile peace with the empire, but he went further, promising to refashion his followers’ very natures from the inside out, making them forever immune to the levers governments must use to maintain law and order: patriotism, lust, hatred, and the fear of death.

Against patriotism he taught his followers to love and bless countrymen and oppressors alike, while denying any earthly government the spiritual allegiance and legitimacy they must have to function.  Against lust he taught them to embrace suffering and poverty. Against hatred he taught them to honor the image of God equally in every human, friend or enemy. Against the natural fear of death he promised to raise them from the dead.

Against division and tribalism of all kinds, he invited his followers into a new tribe built around his life and teachings and devoted to bringing heaven to earth.

No one knows how much damage Jesus might have done had he gone unchecked, but mercifully he did not. In an dazzling feat of political sleight-of-hand, the Jewish religious leaders succeeded where Herod had failed thirty years before, maneuvering the local Roman governor into executing Jesus despite his having broken no Roman laws.

That’s where it would have ended, but then  Jesus’ followers started a rumor that he had returned from the dead. They urged everyone to abandon their tribes and join them in the absurd upside-down kingdom of Jesus, whom they now claimed was sitting at the right hand of God in heaven.

These Jesus-followers multiplied and seriously threatened civilization until the Roman empire, after several failed attempts to exterminate them, finally managed to curb their craziest tendencies by embracing them as political equals. Lured by the promise of official protection, they became flaccid and obedient and even rediscovered their lost patriotism. From then on, Christians mostly stayed busy helping individuals feel spiritual while preserving our power structures in good order.

As we neutered Christianity, we also sanitized the Story of the peasant king, making him chubby and harmless and adding layers of gaudy ornamentation, until we had mostly submerged the raw, frightful Fact of his scandalous birth and criminal lifestyle beneath a heap of candied fictions.

And that’s how one Jewish messiah almost destroyed civilization.

Today the world we have built is at risk from all directions. As decades pass, hairline cracks appear in the elegant pillars of our power. And amid all the other threats to our civil and religious order, the old myth of the middle-eastern peasant messiah has not only persisted but grown. For you must know that even today some people claim he is still, somehow, alive and working on earth, building an irresistible kingdom in the hearts of his followers, who are impossible to count, silence, or corrupt with patriotism, lust, hatred, and fear. That’s why this season is the most dangerous of the year. This season is when, over much of the planet, people retell that sinister myth.

Ah, but why should I conceal from you my deepest worry? I’ll be straight with you: According to our intelligence, this horrible “myth” is in fact no myth at all. It seems this Jesus, despite centuries of our best efforts, is still active on earth, building a resistance. Against me and against you, and against everything we both hold dear.

This is why we must keep them all focused on the nostalgia, candles, spice, and shopping: not to remind people of Jesus, but to distract them. Most of the year this is unnecessary; people stay busy with work and school and entertainment and sex, and they have little breathing space to think seriously of eternal matters. But when life slows down a bit, and the nights grow long and the stars bright, people recall the Story, and the ground shakes beneath us. If we fail to clog their minds and their schedules with trivialities this season—if we allow them a lull the dark heart of winter to ponder ancient, unspeakable things—they may begin to awaken.

Listen. When people join the tribe of Jesus, they become freaks: untouchable by patriotism, lust, hatred, and fear, they are immune to the power of laws, the allure of wealth, the awe of weapons and armies, and the weight of hierarchies. They cannot be silenced or corrupted. They genuinely believe they are capable of reigning with Jesus in a kingdom that liberates everyone and starts over from scratch, flourishing as a perfect reflection of heaven itself. Allow too many such people in a society, and that society is doomed. You know better than to go down that road, of course, but not all are as wise as you.

As you know, God was the original owner of this world, but at present, I remain in charge. At your invitation, remember. If you ever let him back in—for real, not just in the lyrics of a kid’s song you’ve never really meant—everything you love is at risk. Your guilty pleasures (yes, that one too) your spiritual and political role models, your church and family loyalties and grudges, your nation, your flag, your constitution, your national anthem, your property, your safety, your rights as a citizen of the greatest country the world has ever known.

I cannot overstate this. If your loyalty ever lapses and he breaks in, your life is quite literally over. He will own you, body and soul, just as he did in the beginning, before I arrived to introduce you to the joys of selfishness and civilization.

Beyond the steam of spiced cider and the thin veil of tinsel and lights, Jesus of Nazareth, the wild-eyed middle-eastern peasant, the world-wrecker, is nearer than you think, knocking, knocking, knocking. Do not open the door. That’s treason.

2 responses to “Treason Is the Reason: Advent in the Shadow of Dread”